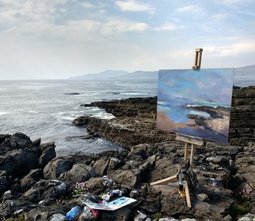 Biography
Morgan grew up in Donegal in the Northwest of Ireland.  The subjects of his paintings are the Irish landscape, particularly Donegal and surrounding counties. He favours working 'plein air' or on location, his preferred medium being oil.
Collections